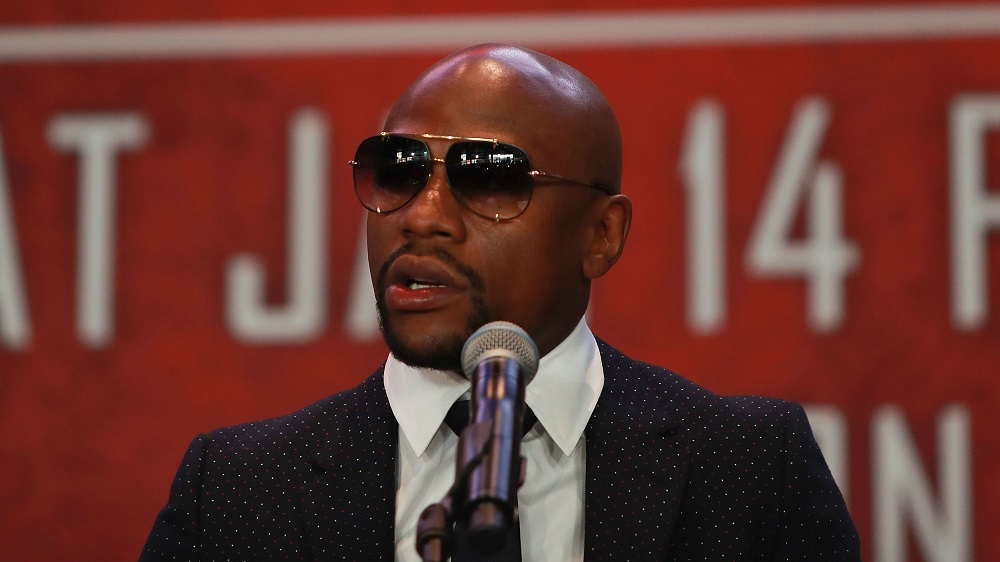 When news broke earlier this week about Floyd Mayweather fighting Japanese kickboxing sensation Tenshin Nasukawa in Japan, it was met with much skepticism. Apparently, Floyd was ambushed by Japanese fight company Rizen and the whole press conference was a set-up to give Rizen some exposure in Western markets.

I originally wrote two days ago that something was fishy in regards to the Tokyo press conference to announce the fight. It seems I was right. But to be fair, even a broken clock is right two times per day.

Almost predictably, 50-Cent came out on social media to pour scorn on the fight and surmise Floyd was going broke.

The Truth about Floyd Mayweather and Rizen

Floyd released a 300-word statement on his Instagram page on Wednesday to clear up the issues pertaining to the supposed New Year’s Eve bout against the Japanese kickboxer. He basically called the fight off and said he was scammed by Rizen.

Now that I am back on U.S. soil after a long and disappointing trip to Tokyo, I now have the time to address you, my fans and the media in regard to the upcoming event on December 31st that was recently announced. First and foremost, I want it to be clear that I, Floyd Mayweather, never agreed to an official bout with Tenshin Nasukawa. In fact (with all due respect) I have never heard of him until this recent trip to Japan. Ultimately, I was asked to participate in a 9 minute exhibition of 3 rounds with an opponent selected by the "Rizen Fighting Federation". What I was originally informed of by Brent Johnson of "One Entertainment" was that this was to be an exhibition put on for a small group of wealthy spectators for a very large fee. This exhibition was previously arranged as a "Special Bout" purely for entertainment purposes with no intentions of being represented as an official fight card nor televised worldwide. Once I arrived to the press conference, my team and I were completely derailed by the new direction this event was going and we should have put a stop to it immediately. I want to sincerely apologize to my fans for the very misleading information that was announced during this press conference and I can assure you that I too was completely blindsided by the arrangements that were being made without my consent nor approval. For the sake of the several fans and attendees that flew in from all parts of the world to attend this past press conference, I was hesitant to create a huge disturbance by combating what was being said and for that I am truly sorry. I am a retired boxer that earns an unprecedented amount of money, globally, for appearances, speaking engagements and occasional small exhibitions.

Floyd took to Instagram to claim that he was supposedly in Japan discussing a private behind-doors 9-minute exhibition fight for a small group of wealthy people.

But by the time he got to a pre-arranged press conference, the Japanese MMA company Rizen Fighting Federation flipped the script and announced a real fight on New Year’s Eve in Japan. Here is Floyd’s take on the press conference:

“This exhibition was previously arranged as a ‘Special Bout’ purely for entertainment purposes with no intentions of being represented as an official fight card nor televised worldwide. Once I arrived at the press conference, my team and I were completely derailed by the new direction this event was going and we should have put a stop to it immediately.”

Is Floyd Telling the Truth?

Mayweather claims he went along with the press conference so as not to cause any disturbance, but in reality, this is exactly what it has caused. The myriad of YouTube boxing channels who have been reporting on this story since the press conference are still not sure that Floyd is telling the whole truth.

Some of the channels are covering these three possibilities:

Option 1: Floyd was completely blindsided by Rizen and what he said in the statement was the truth.

Option 2: Floyd kind of knew what was happening, but by the time he got back home he was talked out of the fight by his advisers and friends and then released the statement.

Option 3: Floyd completely knew what he was getting himself into, but had cold feet as and called a halt to the proceedings before it went any further.

One thing is for sure. Wherever Floyd Mayweather goes, intrigue and controversy go along for the ride. He should hurry up and fight Manny Pacquiao for a second time while his name can still write 9-figure checks.

The Queen of England Is 92 and Still Enjoys Horseriding