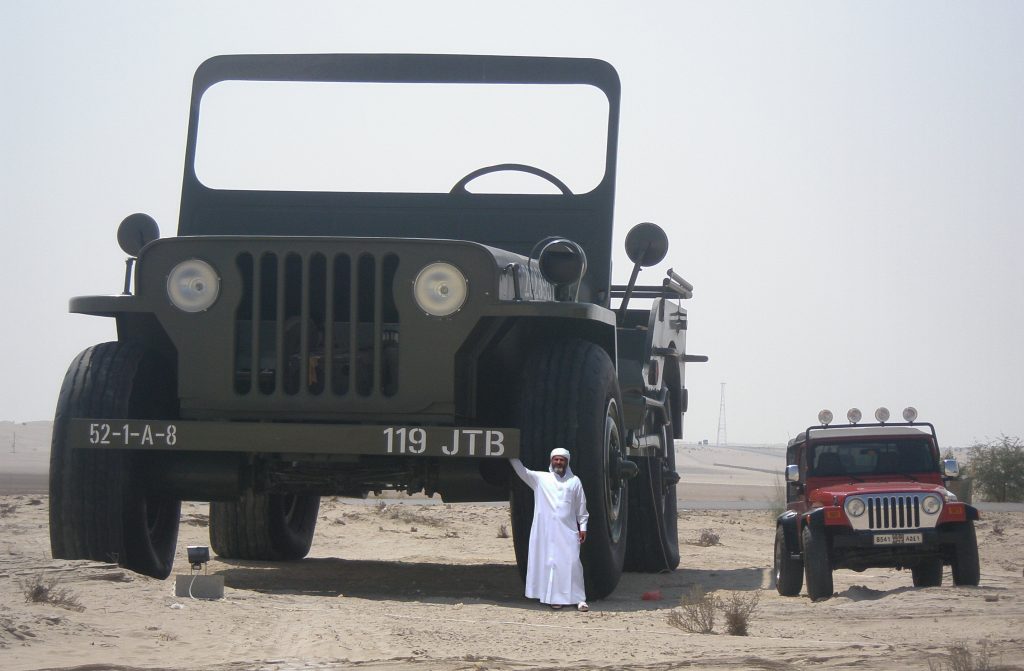 His nobility is a heritage which is shared by other members of the ruling clan. Hamad bagged his first degree in economics at the Emirates University before proceeding to obtain a masters degree at the University of Wales.

His stupendous luxury includes a vast collection of some of the rarest automobiles. Profound among them are the seven Mercedes S-Classes which come in a variety of colors. He acquired these German machines in 1983 and sought the expertise of the “Styling Garage” firm to paint the cars one rainbow color each day of the week.

The German firm painted each car in the colors of the rainbow. Designed with matching leather interiors, the vehicles include gun racks inside the boot lit which accommodate three M16 rifles that match the color of the cars. 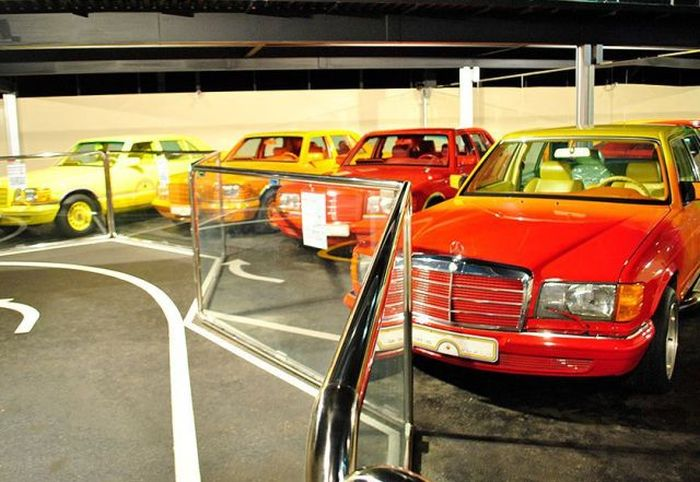 This was where the parallel between the seven colors of his cars and the rainbow was drawn, hence; the nickname Rainbow Sheikh. Though his clout as an Abu Dhabi billionaire reverberates with so much ado in the United Arab Emirate’s capital, Hamad has a fervor for extravagance everywhere he goes.

Unlike Jay Leno who grew up acquainting himself with broken tractors and lawnmowers, Hamad has been preoccupied with the acquisition of rare and puzzling vehicles. A look into Hamad’s world of appurtenances will reveal the possession of a number of vintage Mini Coopers which seem to be a replica of an 1885 Benz Patent Motorwagen–widely regarded as the first ever car–and the only SUV ever manufactured by Lamborghini. 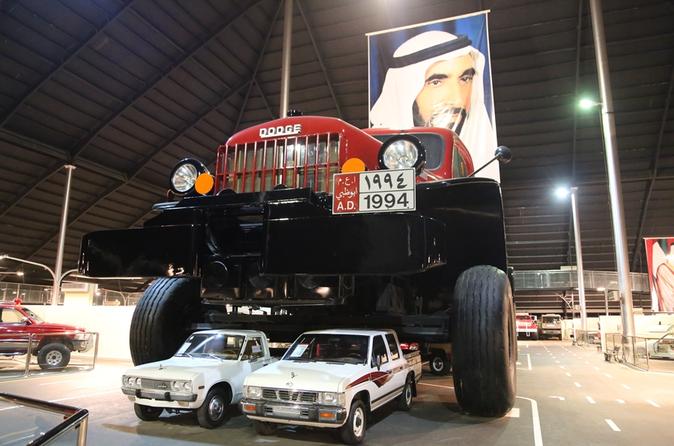 His impressive array which some might deem eccentric includes vehicles ranging from the mundane to the insane. With an overwhelming status as a noble in the oil-rich nation, it would be somewhat pedestrian for someone of his influence to keep such cars in a garage.

Thus, Hamad specially built a pyramid to serve as a gallery for his antiquated collection. Commissioned as the Rainbow Sheikh’s Emirates National Auto Museum, Abu Dhabi, he combines the modern and the conservative taste to carve a niche which the likes of Jay Leno and Ralph Lauren would drool at.

Hamad has a megalomaniac preference for dimensions that seem to defy the extreme definition for oddity. He built the world’s largest jeep; a prototype of the Dodge Power Wagon which is 64 times larger than the original.

The truck which is today the largest in existence has an apartment within. The Emirates National Auto Museum in Abu Dhabi is the only preserve where the rarity of a hybrid dwells.

He has a soft touch for Mercedes and feels well at home with other fans of the brand online. His museum also houses the largest motorized model of a Willys World War II jeep. The jeep gained global acclaim in 2012 when it was placed in the Guinness Book of World Records and the Abu Dhabi billionaire exploited the avenue to espouse the technological wherewithal of the UAE.

The Sheikh never shies away from using his Instagram account as a platform to express his unbridled enthusiasm for ‘aesthetics around the wheels.’ His posts are almost entirely devoted to vehicles and anything related to transportation.

Followers will surely revel in the seemingly endless display of automobile luxury which includes the rarest and the most outlandish available. It features antiquities such as a massive white Ford truck in dunes and a 1959 Pontiac Bonneville. Other marvels include some of the cutest boats that you can imagine on waters. 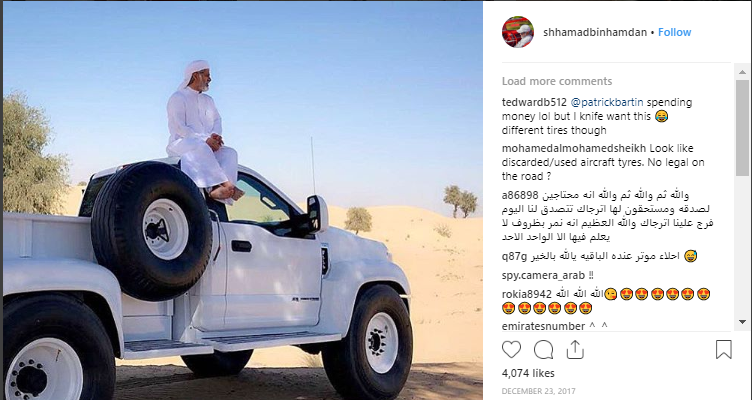 But some may think Hamad only comes to the spotlight because of his penchant for amassing a reservoir of automobiles. Beyond the attention stirred by his hobbies, his fortune according to the Daily Mail is almost as immense as that of the Saudi’s king. Hamad is one of the world’s nouveau riche with a net worth estimated at $20 billion and an abode that could be described as a castle.

He is twice as wealthy as mining magnate Gina Rinehart and even wealthier than the combined gross domestic product of several countries in Africa and Asia. Amassing about 400 different types of automobile barely drills a hole in Hamad’s pocket.

Abu Dhabi—the region where Hamad’s fortune sprouts from—has an immense oil deposit that constitutes 95% of the oil reserves in the United Arab Emirates. His family, regarded as one of the ruling elites in the UAE, controls Abu Dhabi’s oil deposits.

Hamad’s oddball adventures are not only restricted to road and track. He garnered global attention in 2011 when he reportedly recruited workers to carve his first name along a winding network of canals in a mostly-uninhabited island near Abu Dhabi. Named Al Futaisi, this private Island belonging to Hamad witnessed a dredging project creating series of canals snaking through the desert.

The ambitious engravement formed waterways in the sand. The fortune spent on such audacious project which spanned about a mile wide and a third of a mile across, left many lost for words when the Atlantic confirmed that the large letters of his names were visible even from space.

Although the images were wiped away probably for something grander and more in sync with the emirate’s development plan for 2030, his eccentric investment drew much publicity to the touch of wealth residing in the oil-rich region.

The Abu Dhabi billionaire flings his fortunes across America, Europe, and Australia as well. In 2017, the Sheikh spurned exploration attempts of an oil and gas company on his pastoral property in Australia.

While Hamad does not like to appeal to the world as a politician, he holds critical positions in the top echelons of administration in his native land where he serves as the chairman of Abu Dhabi Crown Prince’s Court and a member of the Executive Council of Abu Dhabi.

Why Did France’s Billionaires Get Rich Quicker Than Everyone Else?

Do You Have to Be a Billionaire to Own a Private Plane?